A couple of Fridays ago, I spent a morning in my ward at a community clean-up event. As councillors we do these a fair bit, and they essentially involve picking an area and, er, cleaning it up. It was organised by the police with a local church, along I led a team which included a couple of young offenders who had volunteered for community payback (though understandably didn’t volunteer to be in this photo).

The other group who I’ve done these with is a local neighbourhood watch, where the age profile is a little different (I was the oldest on this clean up- at the neighbourhood watch I’m the youngest). The neighbourhood watch one is lovely- people stop and talk to us and say hello and there’s a nice feel to it. This one however, was rather different. The young people were great, but not a single person who walked past spoke to us. Not one. I even said a friendly hello to a couple of people I recognise from local meetings- and they walked straight past. In fairness, we were dressed head to toe in disposable overalls and looked a tad ridiculous- no, you’re not having a picture of that- but still, I was really, really surprised at the contrast.

I suppose it was a sharp reminder for me of the attitudes younger people are often faced with. A few years back I helped out at charity Envision’s Truth About Youth day, going out with young people to speak to older people in town to challenge stereotypes held about them- a day that was both brilliant in the difference the young people made in each stranger they talked to and their enthusiasm, but sad when you realised what the older people believed prior to that.

It’s a lesson I’ll need to remember for a long time. I’m not going to tell you my age as it doesn’t really pay to do so in my position, so let’s just say I currently look too old to get asked for ID (sob) but young enough that I get told at least twice a week that I “look rather young for a councillor”. And young enough, on that litter pick, that I passed for one of the scary young people, and got treated like they were for a couple of hours. Too soon, I’ll look too old to have that problem, and it’s important to me that I don’t forget what it’s like for those that do.

This, by the way, is less than a quarter of what got collected that day. So next time you’re getting the bus by Sainsbury’s in Selly Oak, or passing the Bear and Staff, think a thank you to the young people who cleared it up for you. 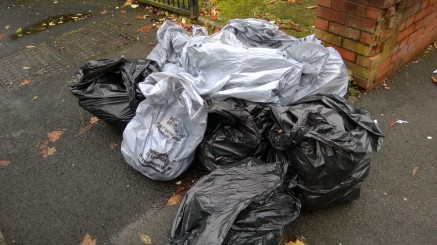